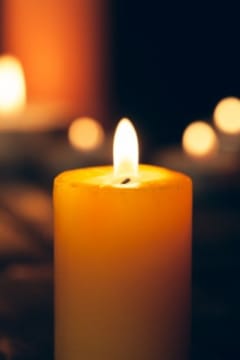 Carol Tottle passed away on July 12, 2021 at age 87 in Virginia Beach, VA. Carol was born in New London, WI, as the daughter of the late Carl and Verna (Schmidt) Cahill.
She was a teenage member of the 4-H and won prizes for her apple pies and dress making. She rode horses and loved to bowl. She loved games, especially Bridge and Scrabble, which she played well into her eighties.
Carol excelled at school and attended Fairleigh Dickinson University. Her 59 year marriage started with a walk though the school cafeteria in her horseback riding jodhpurs that caught the eye of returning Korean war veteran, Woodbury “Woody” Tottle.
Their courtship and marriage produced, two years later, a quick family of 4. When they settled in upstate New York with the family now including a little girl, they had their new home, neighborhood friends and tickets to the AFL Buffalo Bills football games. All the kids were about to be in school, the girl now 6, when they welcomed the youngest and last boy of the family. The joke was, the girl was planned, the boys were (happy) accidents.
Carol and Woody worked and raised their family in several communities including Skaneateles and Hamburg, NY and Pompton Plains, NJ. They downsized and retired in Wayne, NJ.
Carol had many interests in the home and community. She was an avid gardener, crafter including knitting, crochet, sewing, and designing. For the community, she was a member of the League of Women Voters and volunteered for the Pequannock First Aid Squad for many years. She also went house to house working for the Census Bureau. Later on in life, she drove people to appointments and volunteered at the Chilton hospital gift shop.
She and Woody owned B&J Auto Supply in Passaic, NJ. After years of working 7 days a week building a business, they were able to travel together. Their love of cruises took them all over the world. They bought an RV and explored anywhere they could drive in the US and Canada.
Carol is survived by all her children, David, Steve, Lynn Chapman and Ken; her 8 grandchildren and 3 great-grandchildren.
Funeral services were private. In lieu of flowers, Carol’s family asks that donations be made in her memory to The Pequannock First Aid Squad. www.pequannockems.org