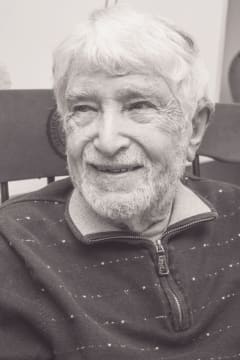 Robert I “Bob” Benjamin
A man whose interesting mind, kind spirit, giving heart, and deep enjoyment of life’s pleasures drew others to him, Robert I. “Bob” Benjamin died on June 21, 2022 at Virginia Beach General Hospital. He was 94 years young and died just as he had hoped: peacefully, on his own terms, and surrounded by his family.

Bob was born on March 9, 1928 in New York City to Max and Gertie Benjamin, Eastern European immigrants. As a child, he developed lifelong passions for baseball and jazz. After graduating from the Wharton School at The University of Pennsylvania, he started in his family’s dress business in New York, but eventually wanted to change direction. So in 1958 he earned a B.S. in engineering and entered the computer industry in its early years, working first for RCA, then for National Dairy Products, before becoming Manager of Strategic Planning at Xerox Corporation in Rochester, NY. While there he became active in scholarship, and spent a month each year at MIT doing collaborative research examining how organizations and individuals adapt to technological change. He published widely-cited articles in respected journals and wrote a book on managing information systems.

After Xerox, Bob became Professor of Information Studies at Syracuse University. In 1994, he met Kate Loring, an SU colleague. Age differences notwithstanding, Bob and Kate made a beautiful team. They formed a mutual adoration society, married in 1998, and as daughter Beth said, with Kate he had a great final act. They moved to Virginia Beach, VA for Kate’s work in 1996, while Bob continued long distance with Syracuse University, teaching executive education courses and mentoring junior faculty until retiring at age 83.

Of the many roles in his life, the role of father (and later, grandfather) may have brought him the most profound joy. As he grew in wisdom and self-knowledge, he cherished opportunities to guide, support, and enjoy his children from previous marriages, Jon, Lee, and Beth, and Kate’s daughters Moray and Claire. He was proud that they had become such kind, ethical, and hard-working people and parents.

A lifelong sports fan, Bob cheered for the NY Mets and NY Giants and talented athletes from Curry to McIlroy. He was coxswain for the Penn crew team and was a mediocre but passionate golfer who lied about his handicap in order to play the great courses of Scotland. Bob loved to read, especially biographies, spy/mystery novels, and social analysis. During his Xerox years he traveled to five continents for work; he loved traveling with his children, and in later years he and Kate traveled in Europe and the U.S. as much as they could, with special love for Italian and French museums and food. He cooked risotto better than anyone and relished good scotch, ice cream, and his own jokes and stories.

Despite various medical crises, Bob was active and vital until recently, although hearing loss slowly muffled his quick wit and made it harder for him to continue the empathetic relationships that meant so much to him and others. Nonetheless, his positive outlook on life, enhanced by years of therapy, made him a wise and perceptive father, husband, colleague, teacher, and friend.

Bob’s final years centered on what mattered most to him—the people he loved and who loved him. He will live on vividly in the hearts of his wife Kate Loring; his Benjamin children Jon (wife Ellen), Lee (Kathryn), and Beth (Peter Haugen); his stepdaughter Moray (Craig Wilson); and the eight grandchildren who brought out that twinkle in his eye: Chloe (Nathan Jandl), Jordan, Judy-Lynn (Joshua Williams), Emily, Cooper, Audrey, Benji, and Cole. Also surviving are his nephew Leonard Benjamin (Debbie) and their children Alyssa and Lori; his Loring brothers-in-law Fred (Barb), Marty (Sarah), and David (Laura); “the Sarahs” and his other Loring nieces and nephews; and dear friends including “the guys”--the men’s group that enriched his life for over 20 years. He was predeceased by his parents, his brothers Zach and Len, and his stepdaughter Claire Cucchiari-Loring.

Bob and his family are grateful to the many doctors and nurses who helped him to have such a long, happy life, including the VBGH staff who eased his final days. In lieu of flowers, the family suggests a memorial donation to the Hampton Roads Community Foundation (www.hamptonroadscf.org), 101 W. Main Street, Suite 4500, Norfolk, VA 23510, where Bob and Kate are establishing a fund to benefit children in need. A private celebration of life will be held at a later date.